I decided to utilize ALL the shuttles I had on hand, which added up to be 13.  I divided it almost in half of dark and light yarn and then I have been randomly using rotating through the darks and lights.  I think it looks better with more colors!  There are more pinwheels popping out. 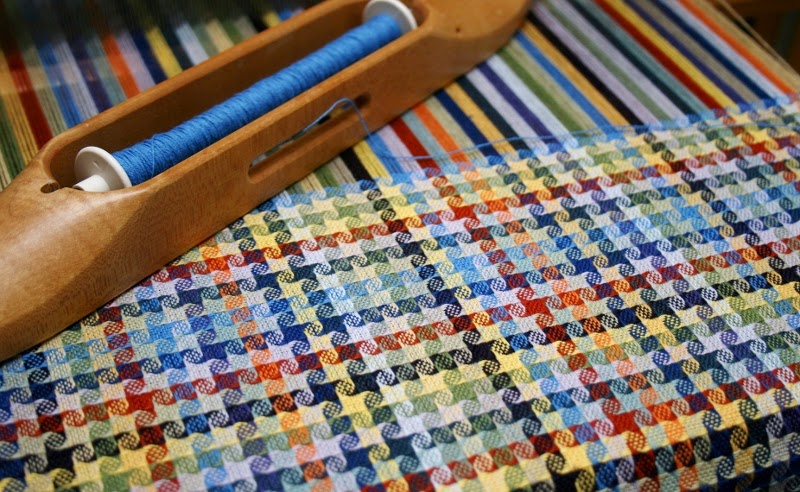 I tried following the colors in a specific order, starting at the right but it didn't seem to make a difference one way or another.  I think the thing that makes it look better is the amount of colors available to rotate through.  I still want to try the original pattern that my friend used though.  I'll get this part long enough to call it a towel after it's been washed and then I will re-tie up the treadles.  Or maybe I'll aim for more of the half way point because I do like what I'm seeing now!  Here's the other pattern I want to try: 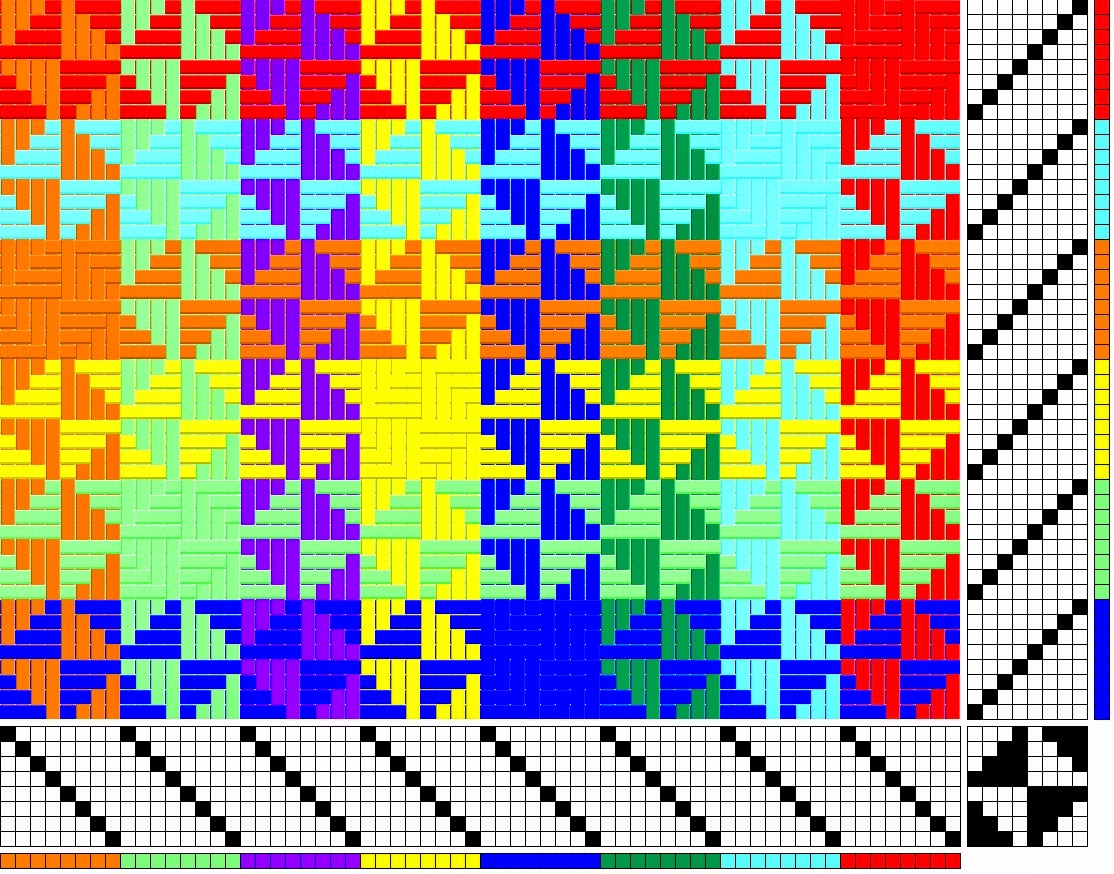 This other pattern allows less "plain weave" in-between the pinwheels that exist in the pattern I'm using now.  I think that might make a difference because the colors are chunked together in a more solid form.  I still like the original project more though!  I think I might just be getting a bit tired of my usual colors.

Good news!  The more I weave, the more I like these towels!

They play tricks on your eyes.  Sometimes you can't always see a pinwheel, but if you look at it differently, like closer or further away, you can see them.  They kind of pop out after awhile!  It's pretty neat.  And colorful!  I have to admit, I like the original pattern I saw more, but this isn't bad for just using what I had on hand.  I'm not one to go out and buy a bunch of yarns for a project... right now anyway.  Maybe someday! 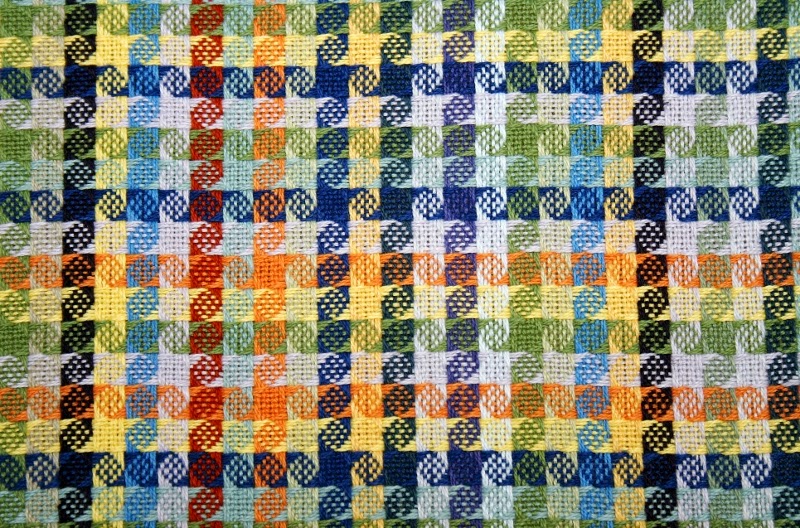 Also, it's good to note that the original design was woven in a slightly different pinwheel pattern.  Once I finish this particular pattern, I might try the same pattern my friend tried.  It might make all the difference and I might be even closer to matching it.  Also, the original design weft followed the same warp color order.... which also might make a difference, but that's an awful lot of thought to put towards it. I'm kind of enjoying this "winging it" thing.  But, if I don't follow the "rules" then I can't complain, right? 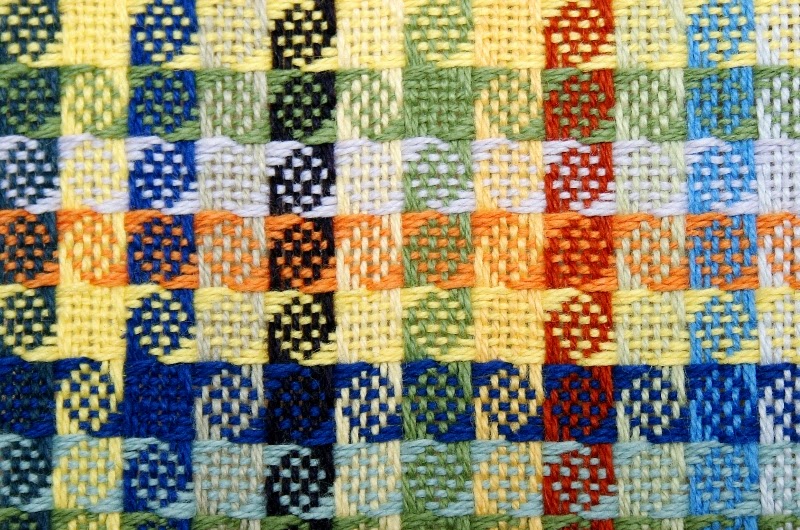 But for now, I'm certainly enjoying these towels in this pattern and these colors!

Everything but the sink... I mean pink

So far, I'm not putting much thought into the color rotations, mainly because the baby has sucked my brains dry right now, and I just don't want to put a lot of thought into it anyway.  I just like the whole free-range weaving theory... just let it go.  "Light, dark, light, dark" is all I'm working about right now!  It's summer-time weaving... my favorite season!  Although I'm not sure I told you the good news yet!  I'm going back part-time next school year.  I am going to job share with another teacher who also had a son 6 days before me, and she too named her son David!  What a small world!  We also went to the exact same university at the exact same time!  She's also from Arizona, and her mom and my mom have the same first names.  I'm sure there's more, but we'll have to discover it as we go along.  Anyway, I will work 2 days, and she'll work 2 days.  It will be WONDERFUL!  I can already tell by my stress levels being so much lower than usual.  And if it works well this year, we might be able to pull it off again next year if we want to! 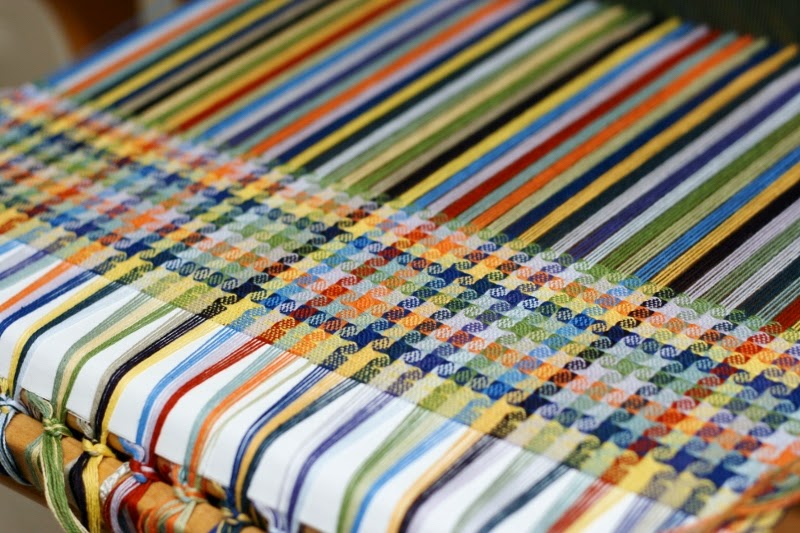 I can't say I have fallen in love with it at first sight like I do with some of my other weaving, but it's neat looking and I do like it!  It's just not quite what I thought it would look like at this pint, but it will probably grow on me after I get going in my color rotations. For starters, I only wound 6 bobbins to get going, but if I had all 18 colors, things would probably be different. 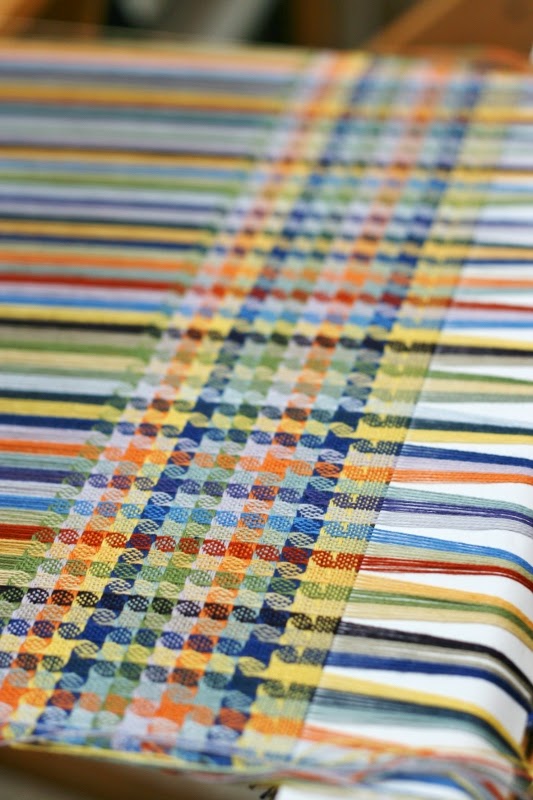 For right now, I'm starting and stopping the colors at the edges.  For lights, it's on the left and for darks, it's on the right.  I'm leaving tails, and it's not because I know what I'm going to do with them yet, but because I don't want to tuck them in and have my weaving grow more on the sides and less in the middle.  With this many color changes, the weaving could quickly grow U-shaped if I tuck in each end at the start and stop. I'm thinking I can either weave them in by hand later, or cut them off completely, or serge all 4 sides and turn them under, or serge all 4 sides and sew on a light binding.  For now, I figure there's plenty of time to worry about it later!

This is from the Sept/Oct 2014 Handwoven magazine!  I love getting articles in it! 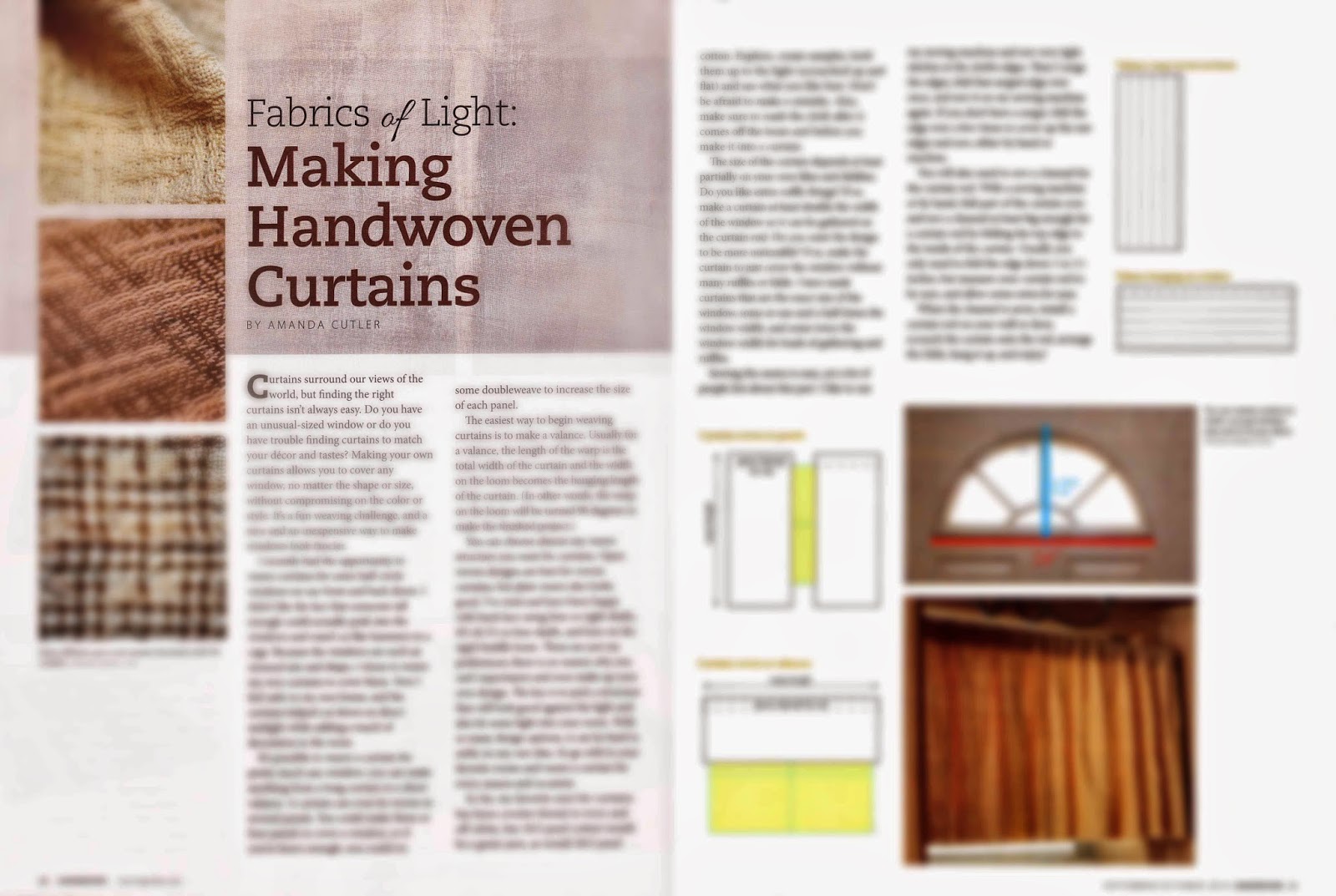 One thing I learned right away when utilizing nap time is this: always put chores first and then fun second.  And when putting chores first, that means washing all the dirty bottles before doing any other chore to get them ready for the next feeding... because it could be any second!  And at this age, it seems as if it's hourly during the day.  So bottles first, then other chores, THEN the fun!

And we're having some fun today!  I am at the jumping off point... that fun point right at the beginning where you're not quite sure if this is going to work or not, where you're hoping for the best, but bracing yourself for the worst, and also that point where you are so excited you don't have a single ounce of being tired of the project yet!  That's where I am right now... 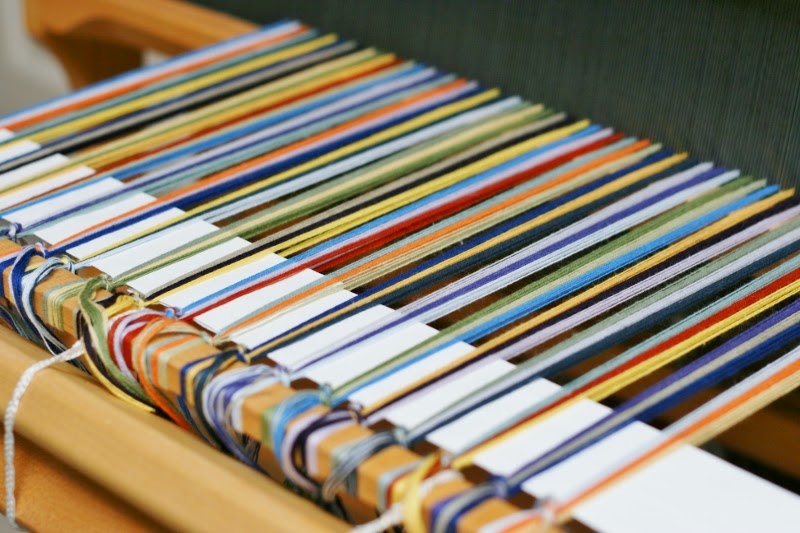 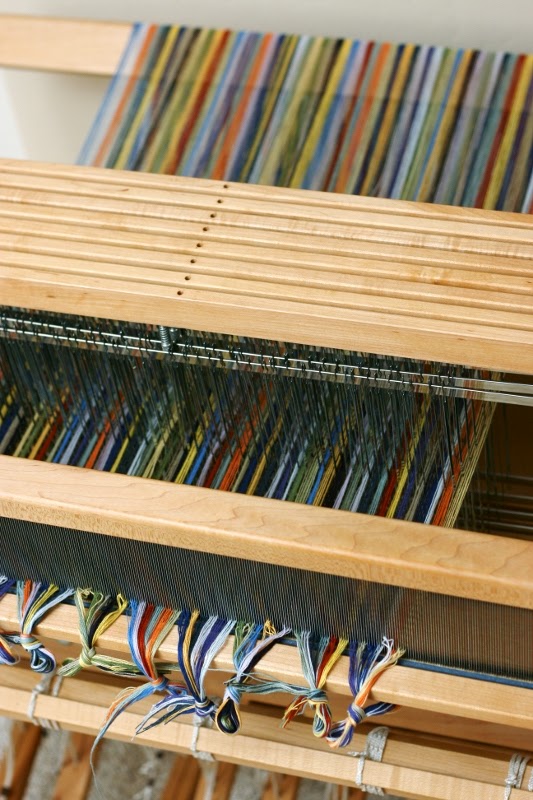 I'm a color mixer!  I have a hard time settling for just a few! 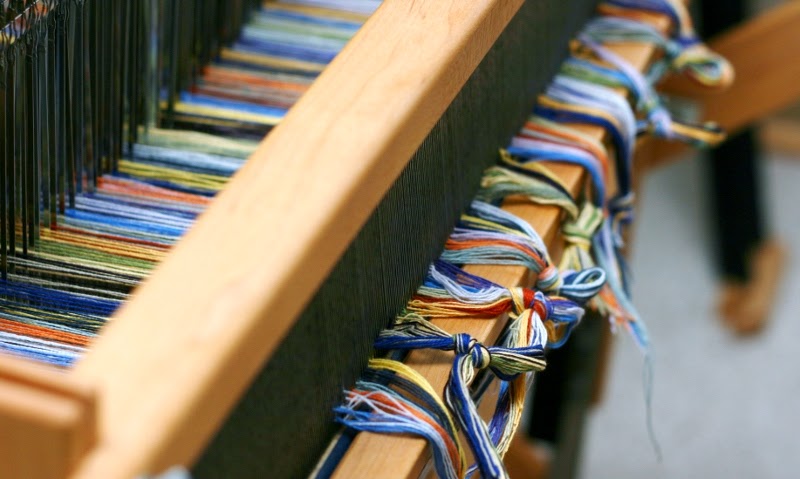 A friend of mine contacted me and asked me if I wanted some of her baby things from her baby boy.  She was done having kids and her son is now 3.  I said sure!  She came over and filled my living room with goodies!  I have clothes for little David from now until he is 3 years old!  And all the clothes are in such great condition and look hardly worn.  She also brought toys and little jumpers and walkers for David to sit in!  It was like Christmas in summer!  To think my friend, I wanted to make her some dishtowels and I knew that she liked colors, but she told me that she absolutely, positively, without a shadow of doubt hates, despises, and avoids the color pink and any shade of pink what-so-ever in every situation.  Well, it was a good thing I asked because I almost gave her that pink scarf I just made that has all those shades of pink in them!!

Awhile back, a friend on ravelry posted this project on ravelry.  When I saw it, I was taken back by how colors and wonderful it was!  Several years later, I have never forgotten it either!  I messaged her on ravelry and asked her for some tips and hints.  She basically just took lights and darks and made stirpes in her warp.  I thought to myself, that simple?!  And you know me, I pretty much just work from my stash, so all the colors I have picked are from things I have in 12/2 cotton.  To me, the mesh of colors never looks that great together at first, but it always works out in the end.  There are several projects I have done that used all these same colors and they all look good eventually when the weft comes in!  Someday when I run out of yarn (will that ever happen?!) I'm not sure what I'll do without my usual colors! 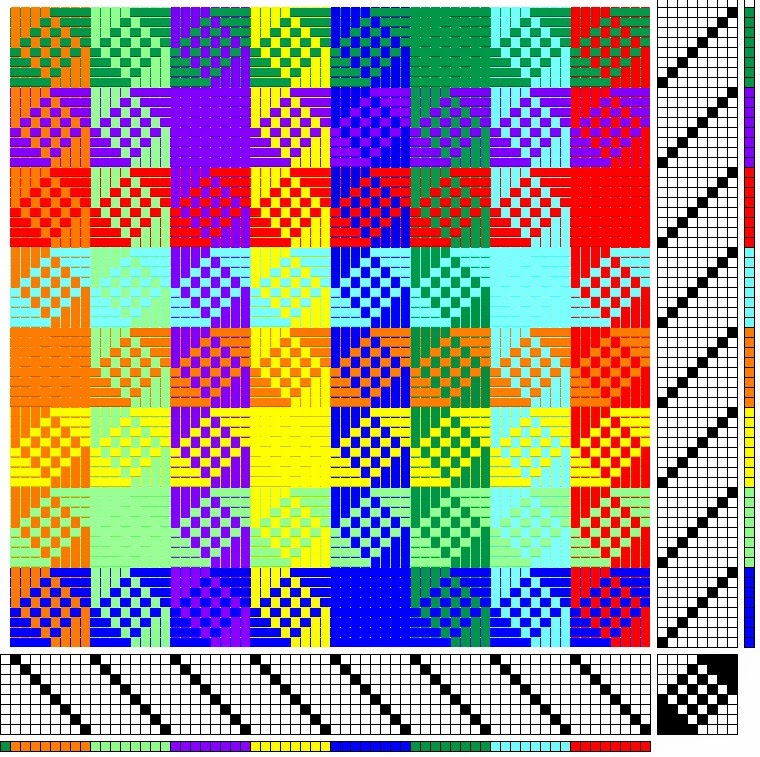 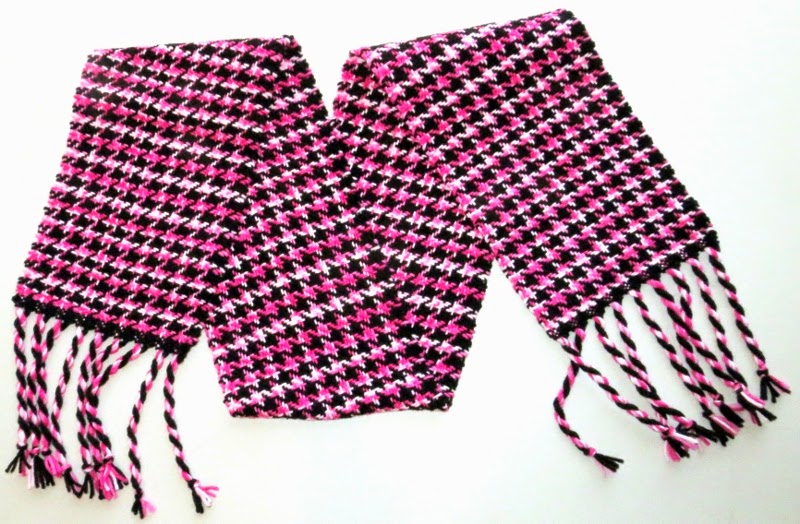 The experiment of 2/2 twill hounds tooth woven in worsted weight polyester yarn worked out so well!  The weave is so incredibly stable! 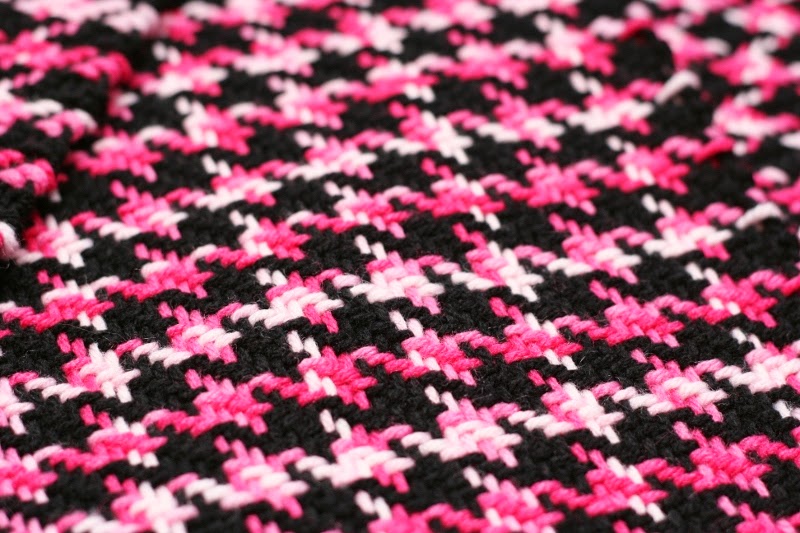 I think I will do it as a blanket in doubleweave...  in black and white! 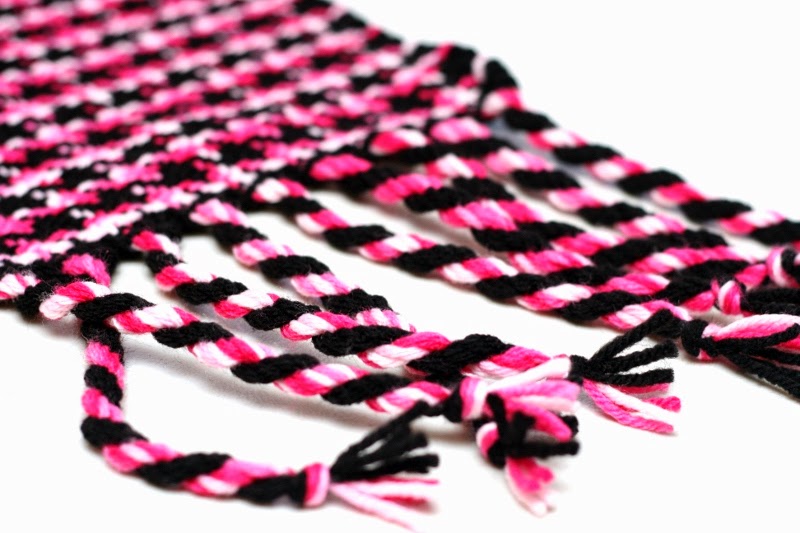 Now I just need to figure out the doubleweave pattern!