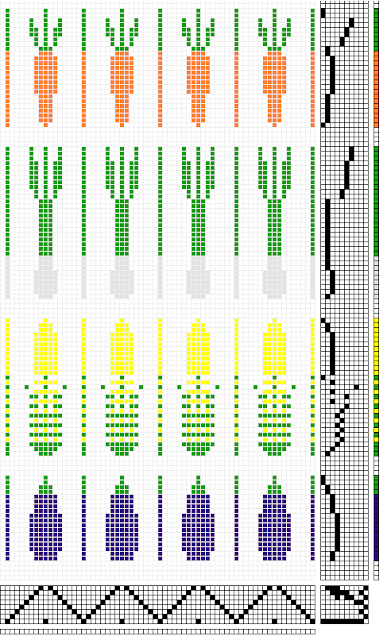 After weaving one towel already, I have made a few changes to the draft so that I don't have to do the skeleton tie-up.  The skeleton-tie up was taking too much concentration!  When I studied the draft really closely, I realized that one pedal tie-up (the lone 7) was not even being used and the 7-8 could be combined with the 1-7-8, so then I was left with exactly 10 pedals!  Perfecto!  So I rewrote out the draft with these changes.  I also re-wrote the draft using only one shade of green, since that is how I'm weaving the colors.

The project is still weaving upside down, and I realize now that it's because I have a jack loom that lifts the shafts up!  I would rather weave it upside down though instead of having to lift pedals 2 through 8!  Lifting seven pedals would be quite heavy!

Another change I have made is to keep the veggies closer together and start them sooner at the bottom so it's more of a motif sequence on one side at the very bottom of the towel.

I would like to try designing my own fruit towels.  Already I have tried designing an apple and cherries.  And I also want to try treadling a tree towel.
Posted by Amanda Cutler at Tuesday, May 17, 2011
Labels: 8-shaft, dishtowels, veggie towels
Newer Post Older Post Home