I'm a self-employed sweat shop with my $20 sewing machine 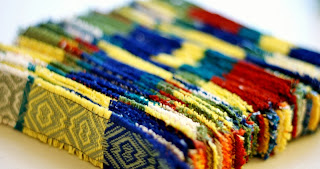 It was a great feeling cutting this from the loom... until I realized I now have 4000 edges to sew.  That good feeling was short lived.

Speaking of sewing the edges, it's time to highlight my sewing machine.  I have noticed that my old sewing machine is a real trooper.  She's quite old... here's a picture: 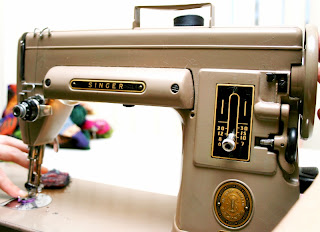 She's a Singer 301A and I bought her 10+ yrs ago at a thrift store that helps animals, for $20.  I clutched that machine the whole way up to the check stand, nobody was going to take her from me!  She's an amazing machine.  In fact, she's an unstoppable sewing train!  It was either last summer or the one before that I sewed right through my finger on this very machine!  It went through the nail and out the other end.  I have never sewn on anything else quite like it.  Even the other old Singers aren't like this one.  The poor thing was very used when I got her, lots of scratches and stuff... but they just barely broke her in for me!  The thing about this machine is if you sew for a very long time with teeny tiny stitches like I do with these bookmarks, the pedal gets so hot, but it works out well because when it gets to that point, I stop and cut and pull threads off the bookmarks and by the time I'm done with that tedious activity, the foot pedal has cooled off.  She's been with me many years and many miles with many more to go!  Thanks for the hard work, ol' gal!
Posted by Amanda Cutler at Wednesday, July 11, 2012
Labels: 8-shaft, bookmarks
Newer Post Older Post Home