I have felt slightly overwhelmed by this recent order.  In fact, I received it a few weeks ago and it's not like me to put something like that off.  But with the craft show approaching quickly, I just felt a need to get some stock up before I could focus on these scarves.  I was most intimidated by the "Chargers" scarf, but needing to weave 4 of these red and white scarves was also intimidating on its own!  However, I finally found my focus and decided to just do it this weekend!


Here is the University of Utah's logo: 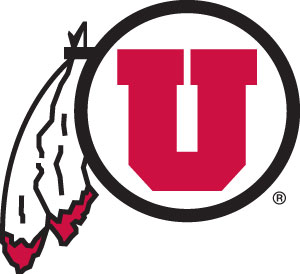 My friend wanted the reddest red and the whitest white I could find! 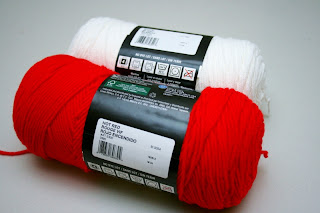 In the store, "hot red" was definitely THE brightest red I could find!  It almost hurts my eyes to look at it! 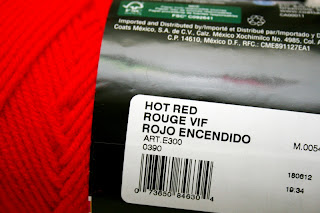 I decided to weave 2 scarves at a time, so I only really need to do this twice. 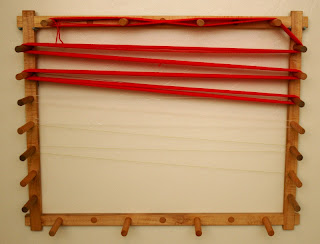 Last time I made 2 scarves at one time, my method was a little questionable.  I made one yarn float all the way at the edge and it stretched out really bad.  It was only by luck that the scarves ended up so close in length to each other!  So this time I made one knot in the middle of the warp. 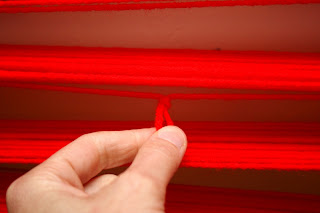 It was made at exactly 2.5 yards.  Now I just need to weave until I find it in the warp!  Because the worsted weight yarn is so thick, it's pretty tough to squeeze this knot through the 8 dent reed.  So I do and don't really look forward to seeing it again soon! 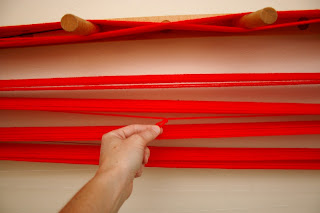 This was obviously a longer warp!  I'm getting pretty used to the short warps, but it will be nice to set up the loom twice instead of four times, even though it only takes about 15 minutes to set the loom up with these smaller scarves.

Something about this warp just looks so familiar, whimsical, and reminds me of the 1990's! 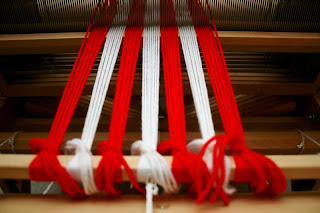 I can't seem to help it, but when I look at these red and white yarns together, all I can think of is, "Where's Waldo?!"  Remember that book?  It was an over-sized book filled with tiny, tiny people and you had to find the one guy that looked like this: 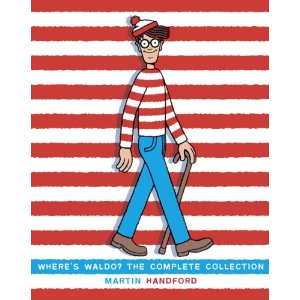 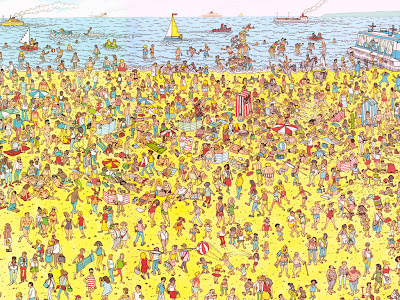 haha!  Sometimes Waldo was hidden really well!  I had a few of those books and loved them!!

So far, this weave is coming out PERFECT!! 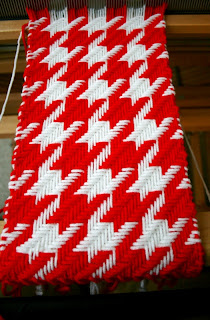 I'll keep watching my crime TV while I weave on this one.  Something about the red just screams out, "Crime TV!  Crime TV!" 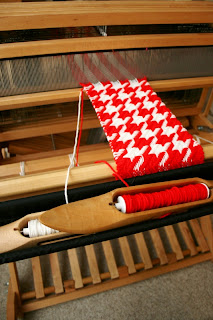