I'm already thinking about Christmas cards.  Don't be too shocked, I think I already had mine done this time last year!  So technically, I am already late!  I have been floating some new ideas around for this year, but can't really settle on one thing just yet.  Let's start with last year's card: 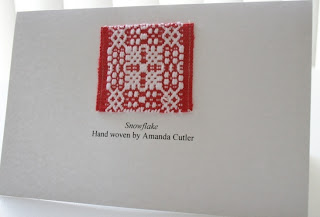 I wove little patterns from Bertha Gray Hayes.  They looked like snowflakes!  They turned out cute, and I just sewed the edges and cut them apart.  Then I glued them onto the cards.  Two problems with this though, first, the card stock is kind of expensive.  And second, people didn't know what to do with it.  I told them they didn't have to do anything with it but enjoy it.  But people wanted to do something with the woven part.  They were so confused, and I didn't mean to confuse them!  I thought of it like scrap booking, you know, gluing decorations all over paper.  But I'm not a "scrap booker" and maybe that is where the problem lies.

So then later in the spring I came up with the idea of bookmark cards.  On my warp, I made spaces between the bookmarks and I didn't like how the edges didn't seem packed in.  They almost wanted to just lazily spread apart too much.  It always felt like I was loosing the ends. 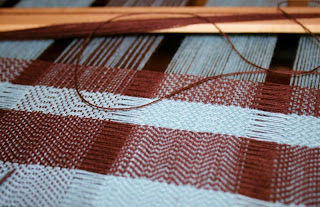 So I sewed all around them on my sewing machine, and then I thought to myself, "Why didn't I just make a solid piece of fabric and then sew rectangles and then cut it all apart?"  I think that would be better. 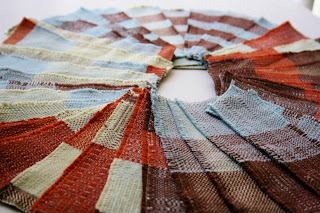 Then after I made the bookmarks, I stapled them onto the card so they could easily be removed.  This works out great, except the cardstock is kind of expensive AND you can see the staples from inside the card.  But at least you get something useful in the end! 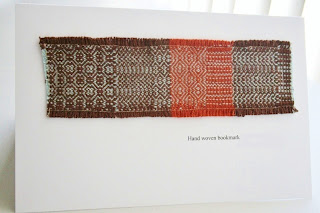 Another problem with this idea is it feels like I've "been there, done that" sort of a thing, because I just made these in April and because I made so many, I sent letters to all my friends already and even gave some away by the dozen as gifts....  so it's not all that totally new anymore even though it started as an experiment for my 2011 Christmas cards! 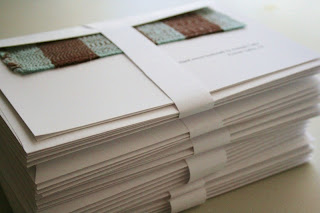 Then while driving home from school one day last month I thought of this cute idea: 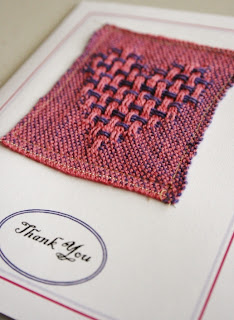 This is actually a little card I sent a friend this week and all I did was take a sample and sew the loose edges with very tight stitches on my sewing machine.  Then I sewed with huge stitches all the way around it.  It's just a quad-fold card printed from the computer on regular computer paper.  The envelopes are really cheap at the office supply place.  So the cards themselves cost next to nothing!  AND the stitches that hold the weaving in place are sandwiched between the folds of the paper!


This solves the expensive card stock problem, but now the only problem that still remains is people will want to do something with the weaving afterwards.  So I'm still thinking of maybe ornaments with really thin batting between it.  I could do a little weaving and then some thin batting, and then some Christmas fabric on the back with a little loop of thread to hang it up on the tree.

Here are my weaving project plans from the Sept/Oct 1995 Handwoven magazine.  It is the Huck lace ornament designed by Susan Leschke from Palmyra, Virginia, page 70 & 92: 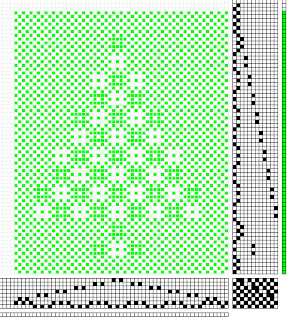 Questions for my blog readers:
What are some of your weaving plans for the holidays?
And when do you typically get started with them?
Posted by Amanda Cutler at Wednesday, October 26, 2011
Labels: 4-shaft, 8-shaft, bookmark cards, Christmas cards, huck trees
Newer Post Older Post Home