Yes, I plan on repairing my bike with weaving!

When my father-in-law was here last week, we started every morning with a biking trip around the city.  Because the town is so small, it didn't take long to show him everything in just a few days!  But we did have a lot of fun and went nearly 60 miles in one weekend.  I enjoyed spending time with him.  One day we were talking about weaving and how many problems I have solved with weaving (like little fixes around the house, etc.) and he commented that I could probably fix almost anything with weaving!  Oddly, my bike pedal strap broke shortly after he left, and guess what?  I plan on fixing it with weaving!

I don't think cotton will be strong enough, so I have decided to weave a strap using nylon thread from Hobby Lobby.  In addition, I have also decided to do card weaving which is stronger than inkle weaving... not that my feet are really heavy or anything, I just want this strap to last 11 years like the original one!  I really wanted bright orange, but it didn't match my bike nicely enough, so I went with neon pink and blue: 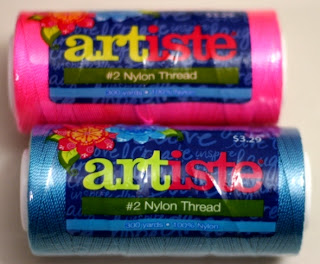 I am thinking of a neat line design... just something pretty, neat, and functional!

At the same time that my strap broke, my cable also broke and when I took my bike to the shop, they said that I needed to get the gear cassette re-done!  A few days later when I picked up my bike, the shop asked me if I wanted to keep the old gears and I said yes because I figured I could make some craft project from it!  My top secret idea is in the works: 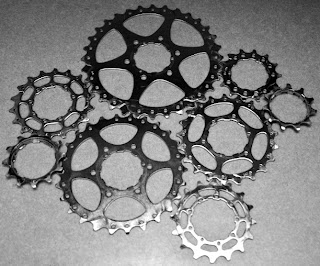 I like all the circles and patterns in the gears.   They took forever to clean up!

Speaking of a few small repairs, poor Scoutie didn't make out so well with his last shave... the razor MIGHT have taken off just a little too much on his head!  Poor boy... at least it's growing out! 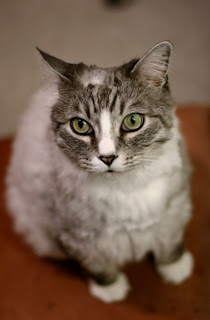