These tree weaves were supposed to be fast and easy!  But no... they had to have some complications.... 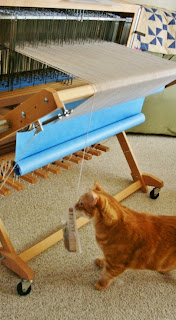 First of all, I made a mistake in the tie-up and skipped an entire section of 5 threads.  I thought it was strange when I was done putting the threads in the heddles and had a few left over, but didn't think much of it.  I thought that it could just be a warping error.  But no... it took awhile to fix, but it wasn't hard, just tedious.  When I found the error, I knew I couldn't just squeeze in 5 threads, so I used the method of threading from back to front to fix it and it was kind of nice!  The other 5 threads that I needed I added at the end and wound onto a thick piece of wood and put it in a bag with rocks so it would be weighted.  At first, the kitties showed a lot of interest in the baggie of rocks and yarn, but they are now leaving it alone.  It's no different than the floating salvages, but... to a cat, anything that swings and is attached to string demands attention.
The second problem happened once I started weaving.  The first skeleton tie-up I figured out ended up being wrong.  I think I must have put it into the computer wrong.  It almost feels like these towels are doomed!  So here is the correct skeleton tie-up for the Christmas trees: 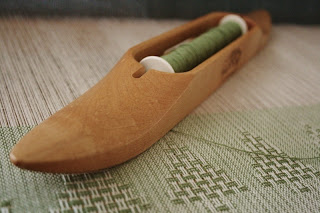 On the bright side, I have discovered the boat shuttle on this weave.  It's so nice to use and it makes such quick work of the weaving!  Wow!!  Up to this point, I have been using stick shuttles because I felt like I had more control, but now that I have discovered boat shuttles, I'm completely insanely addicted to "throwing the shuttle" from one side to the other and watching it glide across.  I just wasn't ready for this before because it felt like it was flying out of control.  But it's awesome now!!!  (And it only ends up on the floor every now and then...)
So now everything is weaving up nicely.  Now that I worked out all the kinks, I can just sit and enjoy the weaving part!  Some warps sometimes aren't as fun or get started smoothly, and this was a perfect example!  I've had too much luck lately, so I guess I was doomed to have this slow and problematic warp eventually!! 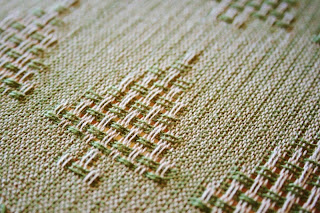 But I still have to hurry up and get these woven in time for the craft show next weekend!