I saw this pine trees pattern in the November/December 2009 Handwoven Magazine, page 62.  They were designed by Karen Tenney and called "Holiday Towels," but I thought that I could make them look like year-round pine tree towels if I didn't add any red.  We have a nice pine tree shower curtain in one of our bathrooms and this will make a great accent decoration!

I used the same warp as the veggie towels, and just added this one in towards the end.  The only thing that is different between the two drafts is the tie-up, so I was excited to put something else on this warp.  I was putting the veggies on only 1 side of the towels, but I wanted trees on both sides this time.  In order to do this, I had to weave the 2nd one up-side down so that it would appear right-side up when it was done and folded in half. 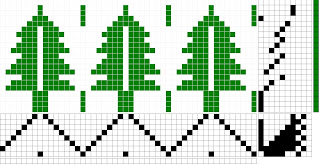 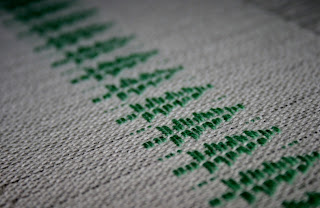 And all washed and pressed: 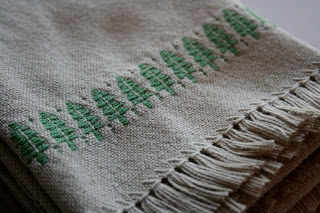