I have only recently (since August) understood how volleyball was scored, only because they needed a scorekeeper at our school and I drew the short straw.  I figured, how hard could it be?  Come to find out, it's not hard and it's actually very interesting to figure out all the little idiosyncrasies of the score-keeping.  In fact, I kind of enjoy it.  BUT... it doesn't mean I like sports.

I was asked by a lady I carpool with to weave her boyfriend a scarf in the Bengal's colors.  I had no idea who they were or what they played, but she said their colors are orange and black.  Well, that's cool for the month of October, but when Halloween is over in just a few weeks and you're the dork still wearing the orange and black scarf, those of us who aren't into sports might consider you an actual dork.  So... after researching the team and finding out they look basically like tigers, I came up with this scheme to cut down on the Halloween-ish-ness of it all, and increase the tiger-ness of it: 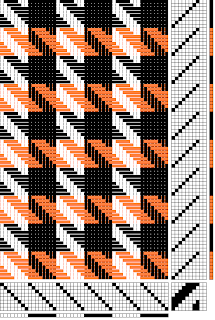 Bengal Tigers, eh?  I guess that must be their mascot... they are the Bengals, and all.