I have 6 rows of 6 snowman, so 36 snowmen complete!  I am not worrying about the sides of the weaving, and if I have a knotted thread come through, I am just placing it in a space between snowmen since I will be cutting them apart anyway.  I made sure to leave a good amount of room on all the sides so I have room to cut and sew, even after washing!  So far, they are looking really good! 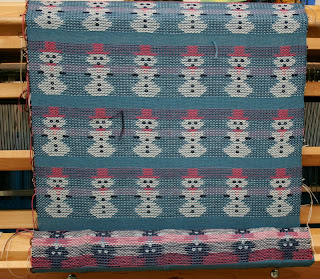 I had to do a loom repair last weekend.  I noticed that my loom was very hard to fold up on my own, and it would always catch on one side.  I also noticed that my weaving always seemed just a hair crooked.  I think I mentioned this a few months ago and I tried adjusting things but it never worked out.  Things were just always about 1/4" off.  I thought it was just me, but come to find out, it is not! Upon further investigation, I noticed that one side of the knobs had a nylon washer and the other side did not.


This was the side with the washer. 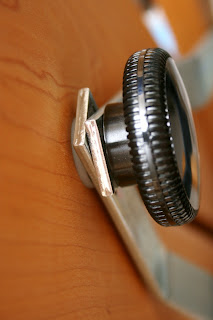 With Brian's help, we removed the original washer and biked over to the local hardware store.  We picked out a nylon 1/4" washer and took it home.  It actually works great!!  (PS.  I actually stayed outside with the bikes so no one would steal them!  So I say "we" picked it out, but really, it was all Brian!) 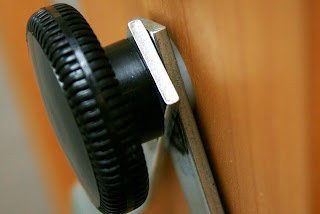 The sides of my loom had a lot of oxidized metal and it was messy looking.  I wiped it off with a damp paper towel, but you can still see some of it.  Trust me, it looks so much better than it did!  I was thinking of maybe rubbing it down with some furniture polish when I take this warp off.  Honestly, the oxidized metal stuff doesn't really bother me much.  A loom is meant to be used and worn! 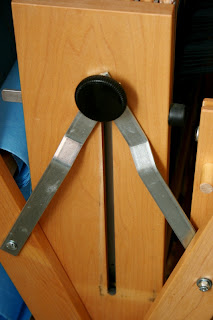 Best of all, my loom is so much easier to fold up by myself AND my weaving is all straight!  I have no idea if I lost the original washer along the way or if it's been like this the whole time because the loom was used... but that doesn't really matter now because it's all fixed!
Posted by Amanda Cutler at Wednesday, December 05, 2012
Labels: 8-shaft, Christmas cards, snowman, summer and winter
Newer Post Older Post Home