I have been using two different crackle books as my reference through this crackle experiment.  They are both good books, but I don't like either of them whole-heartily.  Also, I don't necessarily recommend one over the other.  They are both equally confusing AND sometimes useful references!  One is written more like a combination of book reports (which is driving me crazy) and neither of them are written to just follow through from start to finish.  They are just written assuming you already have an understanding of the subject... and sometimes they contradict each other.

For example, take the explanation of "traditional".  One of the books claims that the first samples I produced were the traditional kind of crackle, while the other book calls it "Crackle in Italian-Manner".  I would like to claim that it doesn't really matter what it's called, but it bothers me to find these idiosyncrasies.  And then the sample I just finished might or might not have two names also! 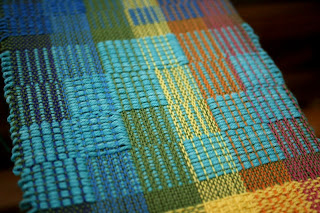 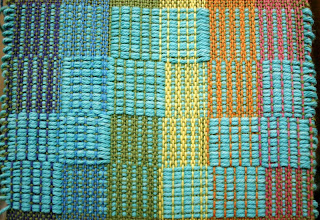 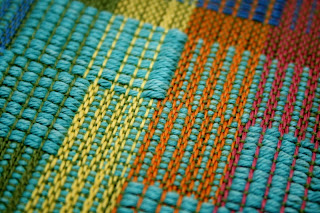 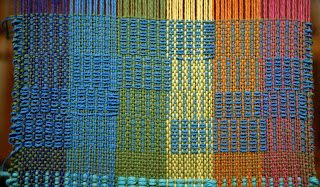 (They aren't very square because I was running out of yarn and was too lazy to get up and put some more on the shuttle!  I figured, what's the point?  I get it, even like this!) 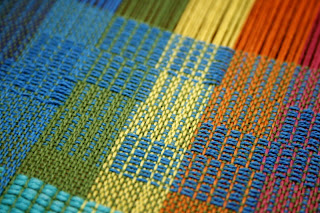 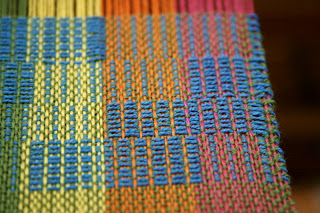 These samples are really making me wonder what I could do with some of my profile drafts that I have.  Would it look best with a profile draft that only has 2 squares?  Or would a 4, 6, or 8 profile draft be cool looking?  There are so many things that I want to try! 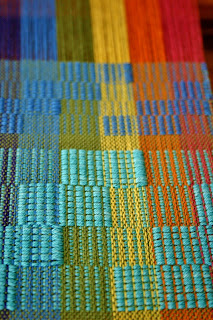 I think I am having a lot of fun this time around just trying out different ideas in my head that I have gathered from these books.  However, I feel that we, as weavers, are in real need of some simpler texts on crackle weave... maybe a book that says, "Thread your loom like this, weave like this, this, and this.  You should be noticing the following characteristics.  Now try this, this, and this."  If I were to write a book, I would take a much different approach than these texts.  I would start from the very, very beginning and work my way up, in an organized manner, with great pictures and great explanations.  Hmm... something to crunch on.
Posted by Amanda Cutler at Saturday, December 29, 2012
Labels: 4-shaft, crackle weave, gamp
Newer Post Older Post Home