Since about Christmastime or Thanksgiving time, our neighbors have been building a house across the street in front of our house.  At first, I had mixed feelings.  There were both good things and bad things about this!  First, the house that is now behind their house was a very loud house that we nicknamed "The Band House" because they played in a band at all hours of the night, and oddly one of the members is partly deaf, so they play REALLY loud so they can be heard!  We were glad when this house popped up because now it covers up "The Band House" and we don't have to see or hear them anymore!  That was the good thing.  The bad thing is that with the lot being filled, it feels more crowded than it once did, but at least the house looks decent and pretty, and we have met the neighbors and they are really nice people!  In fact, they took us on a tour before the house was complete.  I have been taking updated pictures for them and emailing the pictures to them regularly, so they can see the progress on their house while they are away.  Here are some pictures of the progress: 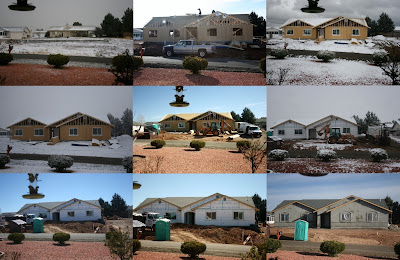 Our new neighbors love color, and they warned us that their house will be very colorful!  I'm happy because I love color, too.  They said the inside will be several shades of greens, and so I decided to weave them a towel from this colorful "everything bite" warp while I had the chance.  It's a very colorful warp, and so I added a sage green for the weft and I think it will be perfect for them as a house-warming gift!  I can't wait until their house is done at the end of this month and they move in! 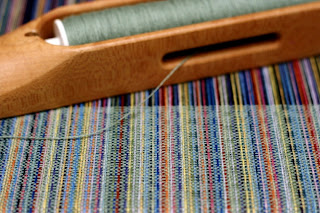